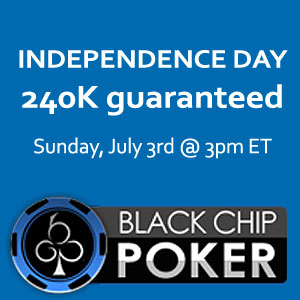 Next Sunday – July 3rd – Black Chip Poker will be hosting a special “Independence Day” tournament with a prize pool guaranteed to be no less than $240,000.

This year, the United States of America celebrates 240 years of independence. To commemorate the event, Black Chip Poker is replacing its regular $115,000 guaranteed “Sunday Special” tournament – currently the most valuable online poker tournament available to players in the States – with a $240,000 guaranteed “Independence Day” event.

The time of the event (3:00pm ET), the buy-in for the event ($215.00) and the starting chip stack (10,000 chips) are exactly the same as normal. However, in addition to the enhanced prize pool, there will also be an extended late registration period (five hours/twenty levels) and a stack more qualifiers for the event – starting at Freebuy level.

Qualify for the Independence Day Event for Free

In these special Freebuy tournaments, players will start with 1,000 chips and ten minute levels. Re-buys of 5,000 chips will be available for $0.25 up until the end of level 18, when players will have the opportunity to add 15,000 chips to their stacks for a further $0.25. Additional seats or cash prizes will be added if the value of the re-buys and add-ons exceeds $27.50.

About the Independence Day Mega-Satellites

Black Chip Poker wants as many players as possible to share the cash in its $240,000 guaranteed Independence Day event, and is hosting mega-satellites to the event every evening this week at 7:00pm (ET). The re-buy and add-on mega-satellites have a buy-in of $25.00 + $2.50 and guarantee a minimum of three seats in the target event – plus more seats and more cash prizes for each $215.00 in the prize pool.

On Sunday at 11:00am (ET) the biggest mega-satellite of all takes place – a $25.00 + $2.50 re-buy and add-on satellite guaranteeing fifty seats to the Independence Day event. This is sure to be a popular route into the target event – especially with so many qualifiers from the Freebuy sub-satellites and the other promotions being hosted by Black Chip poker in the run up to the site´s feature tournament.

If you are an existing account holder with Black Chip Poker, you have the opportunity to reload your account between Friday 1st July and Monday 4th July and receive a 100% reload bonus up to $240.00. You don´t have to deposit the full amount of $240.00 in order to be eligible for the Black Chip Poker reload bonus, any deposit of $10.00 or more will do.

In order to qualify for the bonus, you have to enter the Black Chip Poker bonus code “JULY4” when making your deposit. The bonus will be released in increments of $5.00 for every 120 Award Points earned over the next 30 days – Award Points being awarded at the rate of 5.5 Points for every $1.00 contributed to the rake or paid in tournament entry fees.

The Independence Day tournament may be pretty big, but there are bigger plans for August at Black Chip Poker. Although the dates are yet to be announced, Black Chip Poker has hinted at a “Bigger Online Super Series” (B.O.S.S.) in the near future – a tournament series exclusively for high rollers and featuring a $1 million guaranteed “Million Dollar Sunday” event.

If you want to be part of this series, make sure you are playing at Black Chip Poker. Visit the site today and create your account using the Black Chip Poker bonus code “” during the registration process to be eligible for a 100% bonus on your first deposit up to $1,000, plus access to the Freebuy sub-satellites to next Sunday´s Independence Day event.