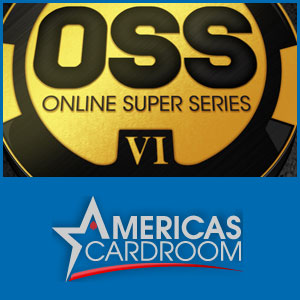 The Winning Poker Network is hosting the sixth edition of the Online Super Series tournament series in mid-April with more than $2.5 million in prizes.

One of the largest tournament series available to US players is coming up again this April with more than $2.5 million in prizes with the Online Super Series VI.

The World Series of Poker Main Event and the World Poker Tour series of main events (for different locations on the tour) were huge, no-limit hold’em tournaments that were broadcast on television that helped to start the big poker boom around 2003. What many people still forget to this day is that these main events were always a part of a larger series of tournaments. For World Poker Tour stops, it could be a set of anywhere from around three to seven events, and for the World Series of Poker, it could be just one of anywhere from 60 to 80.

The Winning Poker Network, the network for top US-facing sites like Black Chip Poker and Americas Cardroom, haven’t forgotten about the importance of the tournament series as a whole, and that’s why they’re hosting the sixth edition of the Online Super Series in mid-April with a total of 76 events and $2.5 million in total guaranteed prizes. If you are not playing at this network yet, I suggest you to check out my Americas Cardroom review here.

A Wide Variety of Buy-in Levels

Something that stands out about this tournament series right away is that there is such a wide variety of levels for buy-ins. On April 15, the day the series begins, there’s a $0.05+0.01 no-limit hold’em tournament (event #7) with a $50 guarantee with hyper mega stack rules. Here is a quick summary of some of the smallest buy-in events (buy-in of less than $5, including tournament fees):

Remember that this listing of affordable tournaments from this series only includes those with a buy-in of less than $5 total. There are plenty of $5.50s and $6.60s to go with this as well.

The Main Event of the OSS

The main event in this edition of the Online Super Series will be Event #70, a $500+40 no-limit hold’em event with a five-hour late registration. The prize pool is guaranteed at $1 million, one of the largest guarantees that US players have seen in a tournament in quite a while. This starts on Sunday, April 24 at 4:00 pm, and it’s a one-day event, so there won’t be multiple days of play. If you sign up to play this, you should be prepared to play well into the night, since it’s likely to last quite a while.

The Series as a Whole

This tournament series is designed to have something for everyone with several events at different levels of stakes, but it’s definitely affordable, as anyone can see with the list of ultra-low stakes events posted above. The series itself starts on Friday, April 15 on the five-year anniversary of the Black Friday event (coincidence? probably not). It comes to a close on Sunday, April 24, the day of the main event and nine other tournaments in the series.

Importance of This Series

The Online Super Series IV is very important for US players because it marks one of the largest tournament series available in the somewhat limited market. This gives players an opportunity to get in on a huge piece of action without having to worry about which sites they can play with and which they cannot. Big series like this happen on plenty of “rest of the world” sites on a regular basis, and it’s cool to see that they can spread to US-friendly sites like Black Chip Poker and Americas Cardroom as well.

Overall, this is a tremendous occasion for players that will commemorate the fifth anniversary of Black Friday, almost a full decade after the passing of the UIGEA, and it shows that online poker is going to be a lot tougher to get rid of than a lot of politicians might have thought.